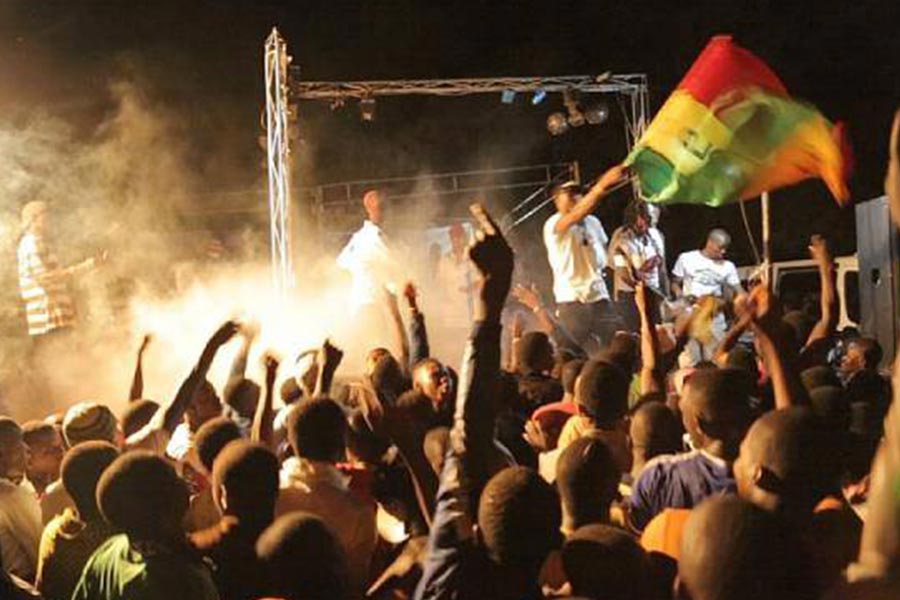 David Naporo Pick, a devoted Playing For Change fan, supporter, musician, and organizer, has used Playing For Change Day as a way to unite disparate groups and bring his highest hopes and ideals to fruition. His PFC Day journey has already taken him to fantastic and unexpected places, and he has even more in store for this year’s event on September 24th.

“I’ve been privileged enough to spend 12 weeks at the Bizung School of Music and Dance in Tamale, Ghana,” David says, “so I’ve seen exactly what PFC Day does to help these schools and help the kids with their education and their music.”

Throughout David’s travels throughout the northern Ghanaian region of Bole, he took a closer look at the needs and concerns of the people and saw a new opportunity for PFC Day involvement.
“Me and my brother Redfyah made a song called ‘One World Tribe’ to promote peace, love, and unity in Ghana. What was actually happening in Tinga, which is a small town in the region of Bole, was that there was a gold mine. So two chiefs had a very big difference in regards to who owned the land because of this gold mine. Redfyah, myself, and the Bole king from Tamale

We had some peace talks with the two chiefs, spoke to them, told them we were going to put on a concert in Bole. We met with the Paramount Chief and he was really happy about us putting on a concert that day.

So basically, what happened is that everyone started talking about peace.

The concert ended up lasting two days, and pulled about 3,000 people each day. And I think that because the people, the youth, and everybody united, everybody wanted peace. So both of these chiefs decided that they would put an end to it. And to this day, there is no feud between these chiefs here, so it’s very, very peaceful.
I was made a wura, which is a chief. I’m the second ever Caucasian chief on the Gonjaland, and hopefully now with that title when we go back for Playing For Change Day on the 24th of September we can make a real change, this time in the city of Damongo. It’d be really cool if people could donate to our cause so that money could be put back to the schools that Playing For Change Day supports.”

Check out David’s upcoming event here, and consider showing your support of our music students in Tamale, Ghana, with a donation!

What dreams and ideas do YOU hope to manifest this Playing For Change Day?